skip to main | skip to sidebar

Research Film by Sally Titterington ©2013
Generous Acts
Film Generous Acts: C21st Product Design from Salone del Mobile 2013 Sample Ventura Lambrate Milan Italy 2013 Designer, Maker and Artist Umberto Dattola presents his Daliesque meets Alice in Wonderland collection with a book and story on the characters who use the furniture.  Umberto takes us on a real Surreal trip.  We are all treated to cappucini delivered to us by steamingly good looking Designer Baristas with beards, William Morris eat your heart out.

Research Film by Sally Titterington ©2012
Generous Acts
Film Generous Acts: C21st Product Design from Salone del Mobile 2012 Sample
The venue is Magazzini Generali, on the outskirts of center, there's a press presentation followed by a party with loud music and the International Design Glitter arty enterarge out in force, everyone's been given 'Throwies' (light flashers) and white gloves for a very pleasant fluorescent effect.  Philippe Stark, Marcel Wanders and many more Designer Stars and up and coming Starlettes and Starlads are there to add to the sparkle.


Research Film by Sally Titterington ©2005
Generous Acts
Film Generous Acts: C21st Product Design from Salone del Mobile 2005 Sample
Jacopo Foggini presents Devotion, a collection of lights made from the same plastic used in the production of indicators for cars e.g. Fiats.  There is a massive chandelier, in the shape of a heart which is approximately 8m deep by 6m wide, and it is suspended in the dark church Basilica di Sant' Eufemia.  (Saint Eufemia lived in the ancient town of Chalcedon, near Istanbul, between the C3rd and C4th and was brutally tortured for her beliefs by the Roman emperor Diocletian. She was finally placed in the arena where lions were sent out to kill her but they refused, and, instead just licked her wounds. It is believed that she died of wounds from a wild bear in the arena).
It's stunning the lights are like Matisse's Jazz prints and the Pop posters of Andy Warhol, morfed into 3D lights.  What a powerful installation the lights are bathed in the  smell of incense Holy Smoke and saturated by the sound of classic La Scala operatic vibratos now this is impressive, highly emotional and dramatic.  This is the opera of design theatre, the Opera Theatre the strings holding up the heart that is holding down the steeple is pulling the heart strings of the people who enter this Holy emotionally charged electrical storm.  It's really a Surreal classic site, a Futurist's paradise and Jacopo Foggini has stolen my heart, this piece was and still is a show stopper. 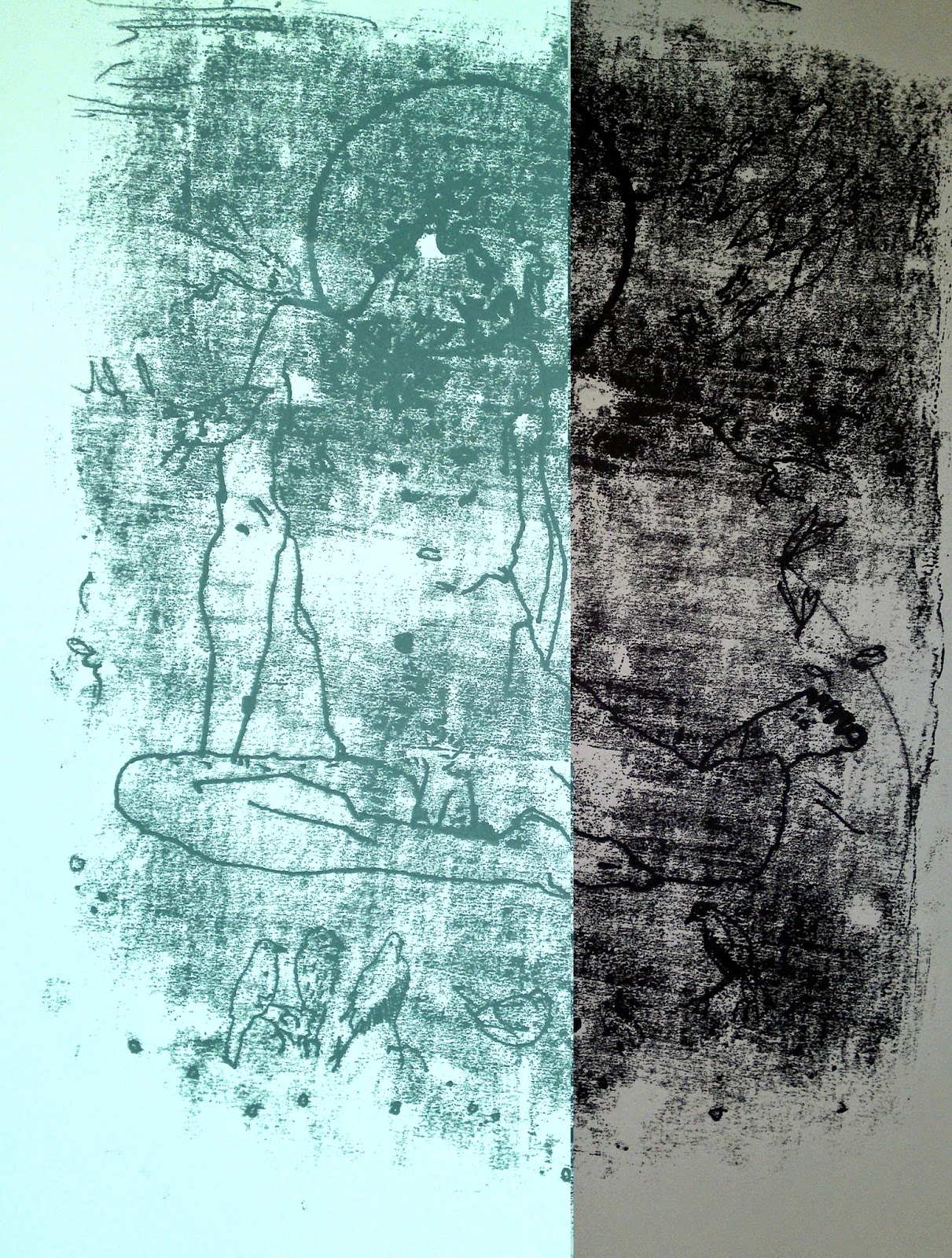 'It's a Draw' film: Sally Titterington

Mill Memorabilia
A club night at Islington Mill, Manchester, Anni Rossi drawing with friends to music, with her over head projector drawing
contraption  back in time, March 2008.
Now this just makes me want to get on the dance floor and draw. 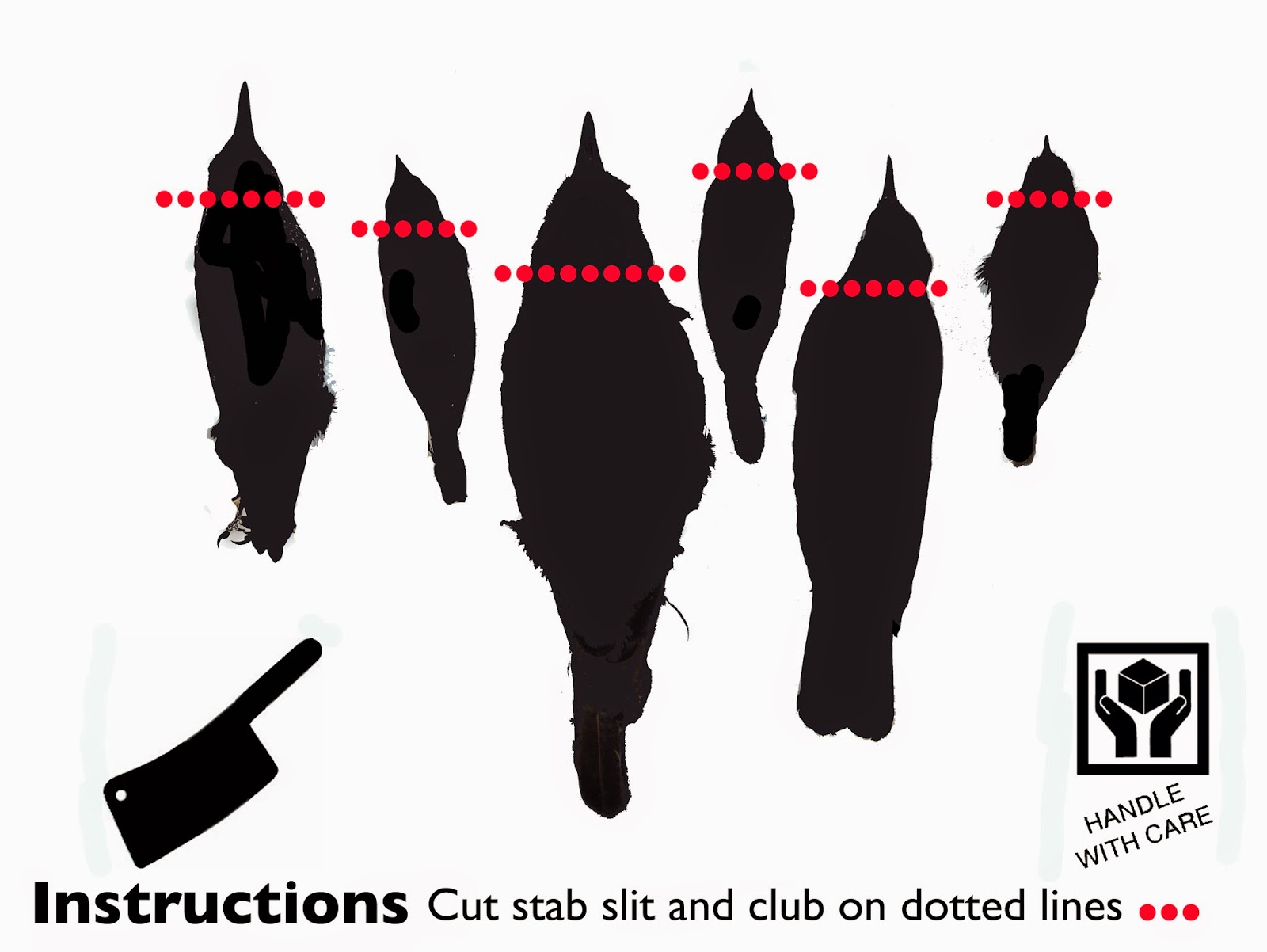 'Off with Their Heads'
Poster for a Club night, Islington Mill Manchester... 'So much to answer for' (As Morrissey would sing) 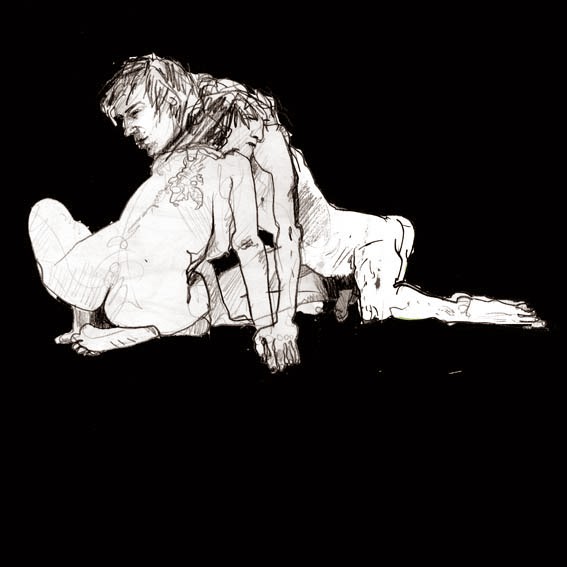 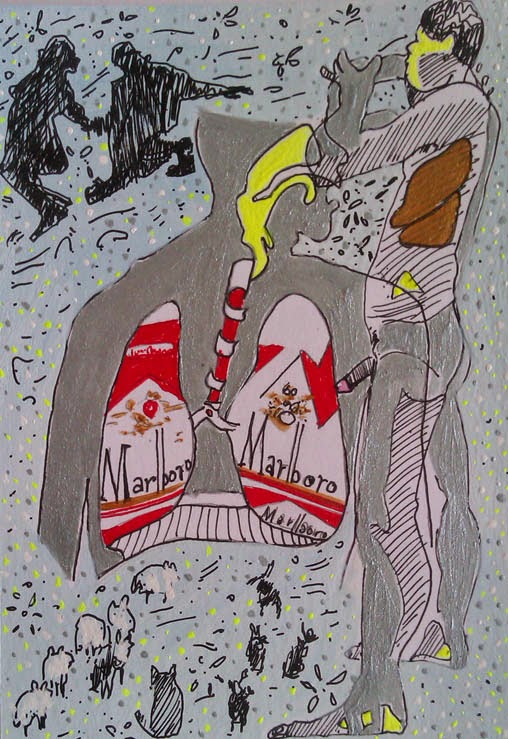 Fruit
flavored shisha
smoke fills the air
Flying through
Kensington Gardens
Burning sunshine
A woman in a full black yashmak
In a session with her personal trainer
In the deep dark lush green grass
A dog was on the run someone shouted Rabbit
What an unusual name for a dog?
You hear, see, smell up ideas
In the speed of one's bike..

A Love Poem to Manchester, once known as 'The Workshop of the World'.

I love the story of the scientific research, led by Andre Geim and Kostya Novoselov, being carried out at Manchester University, on graphite and the discovery of Graphene.  The term “Friday evening experiment” was used to describe a set of off beat, interest driven experiments but cunningly disguised the actual amount of work required to get any results.

Could this super material Graphene reignite Manchester and bring back the passion of Integrity and Industry, the city's motto. 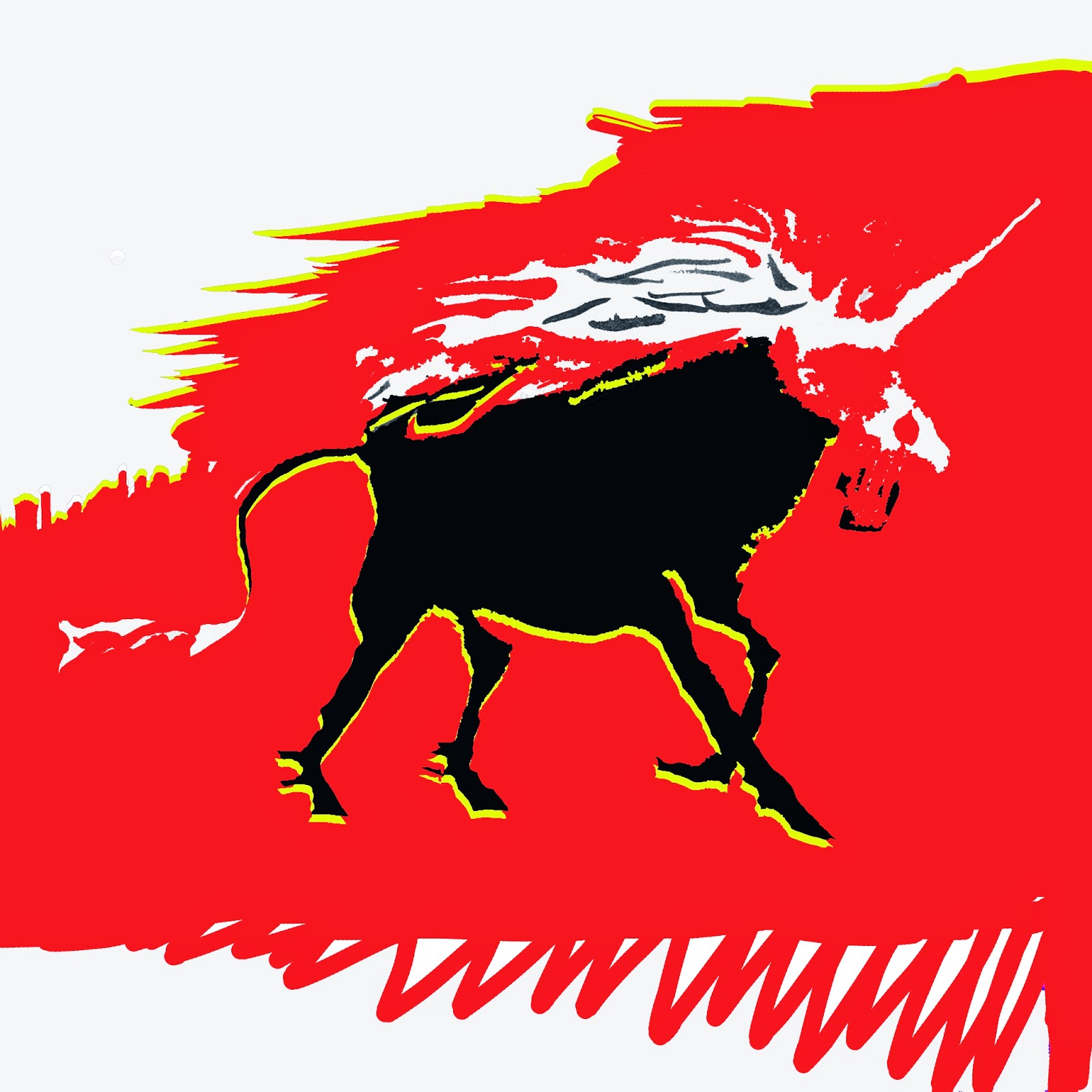 Genetic engineering is an ancient idea.  Manchester's crest is of the lion and the unicorn with the motto 'Integrity and Industry'.  A Biblical Beast, the  Old Testament, book of Job,  'The body of a horse, the mane and tail of a lion, beard of a goat with cloven hooves'.  My Wild Unicorn crosses the bridge to enter Salford for a 24/7 party SFTOC Sounds From the Other City, Salford's biggest annual music and arty party, started in 2005.
'SFTOC itself is the truest representation of what Manchester music is today'.
NME

Birds in the Bush 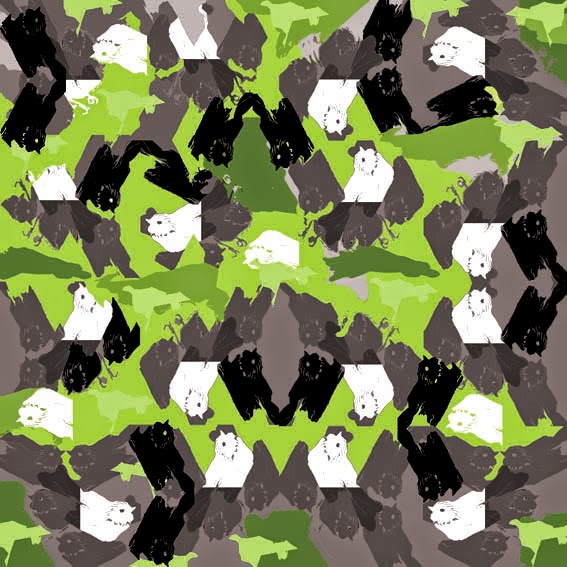 A Bird Told Me...
Birds of a feather flock together.
A bird in the hand is worth two in the bush.
The birds were flown.
The Bird must flighter that flies with one wing.
There's nothing a bird likes more than the sound of it's own voice. 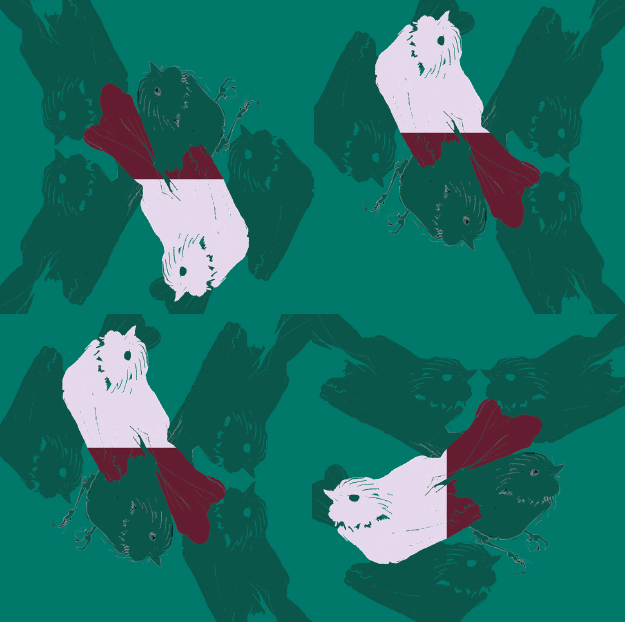 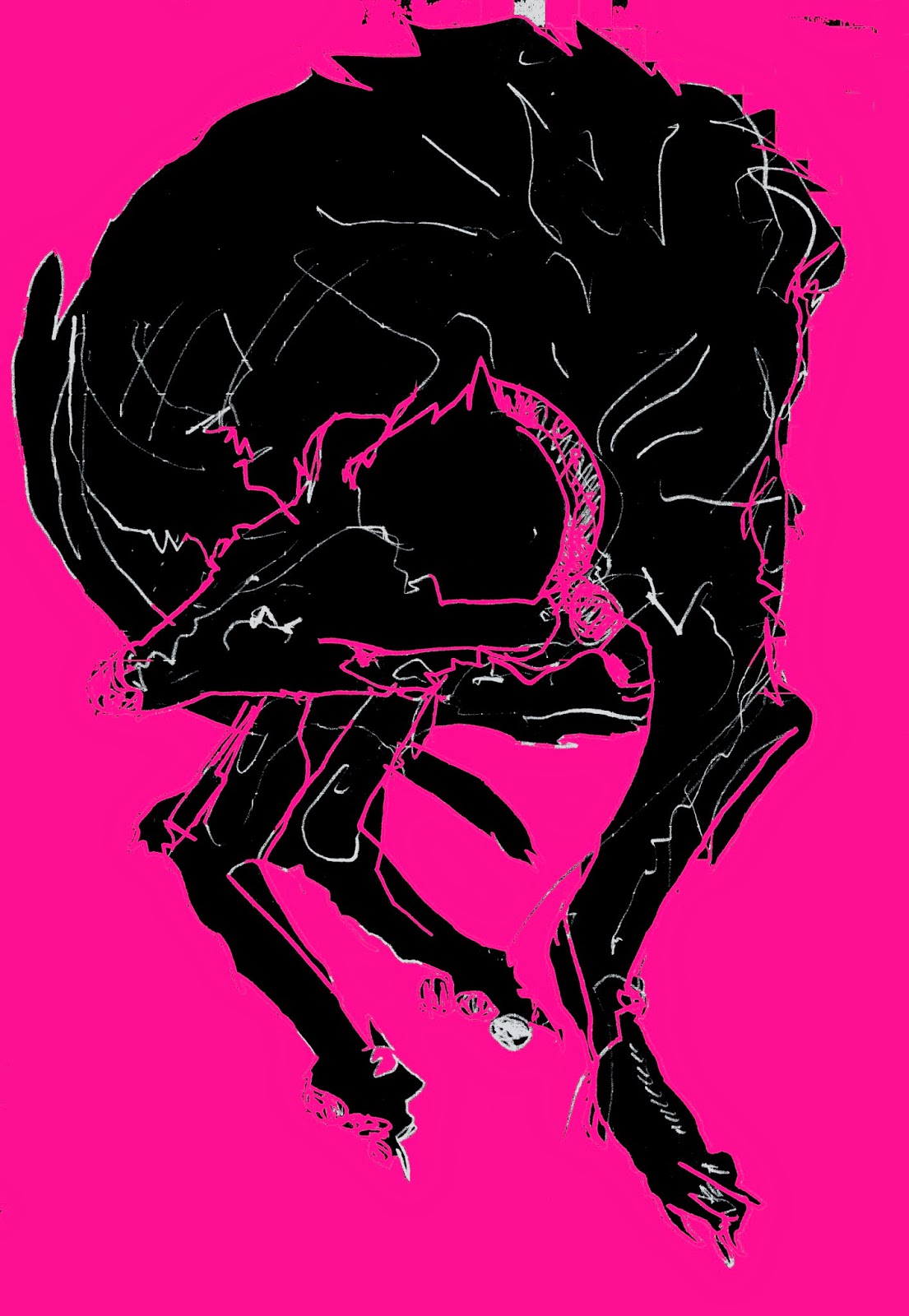 Sleeps on the train floor after an exhausting day running through fields of wheat and flowers.

Lorilie is a 'Galpos' Spanish hunting dog.  S
he was badly abused in Spain, as once the Galpos are finished hunting they are of no use and can experience cruelty, by being beaten and starved.  So, she has come to live in England and she is loved and cherished.  She is so sweet and gentle, and she is my mews.  She's got to know me and I love it when we meet she comes up to me and nudges my leg with her nose, in a way that's saying hello it's really good to see you, I like you.

Damson is her house sister, she's from an East End dog racers but she was not very good at racing, couldn't be bothered and was given away without being brutalised.  Damson is not the brightest button in the box however, she has a great sense of humor and if your jokes are good and entertaining she gets up on her hind legs and paws you.  It's almost like she's saying 'Oh say that again, I love that joke'.  She has thick grey fur that reminds me of a koala bear's coat and when she eats she shows her true racing skills, she really does wolf it up. 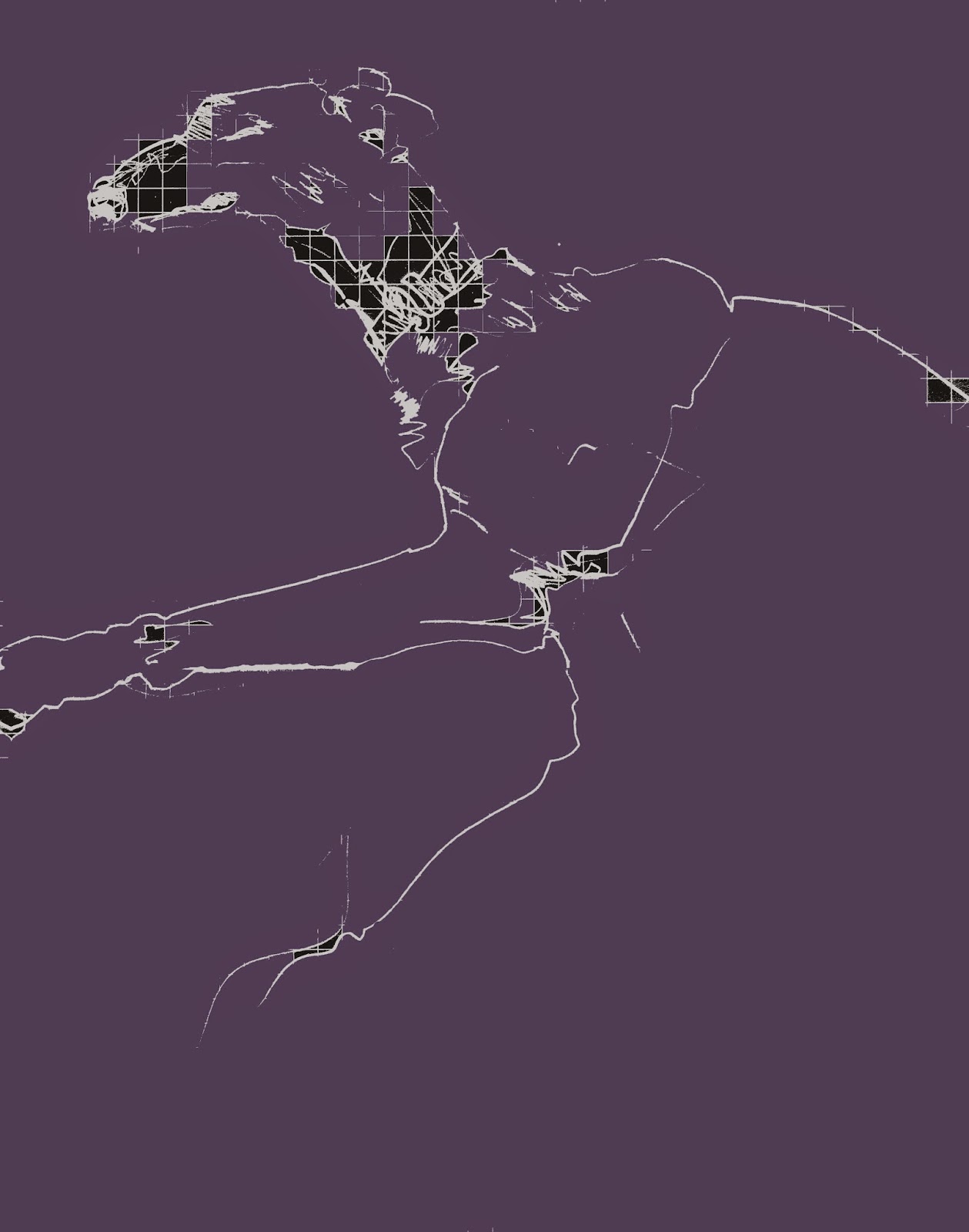 I sketched her on a gridded sketch pad paper and scanned the image in.  I spent hours in photoshop removing each line and square but quite liked just a few remaining on her face and neck.  My friend who owns her and Lorilie was concerned as it looks like a muzzle and she reminded me of the cruelty the dogs can endure.

Lorilie le Sade and Damson sleeping on the train floor after an exhausting day running through fields of wheat and flowers.